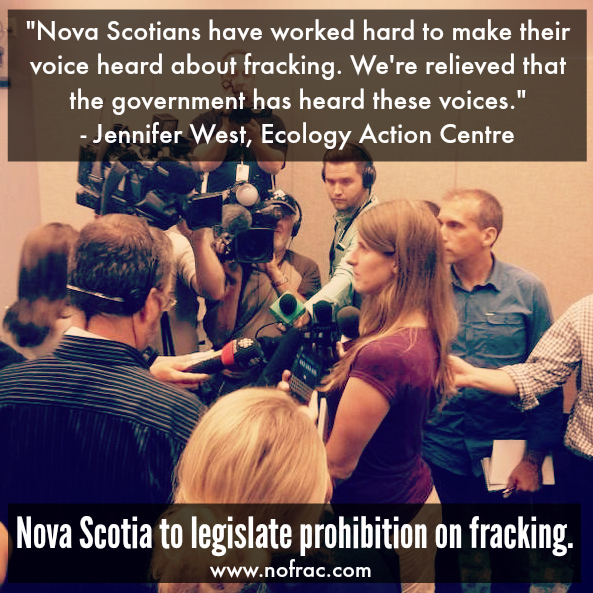 We are pleased with the announcement of legislation to ban fracking this fall, and look forward to seeing the details.  Thank you for all your hard work, and please consider writing a thank you note to Andrew Younger to thank him for his decision.  energyminister@gov.ns.ca

The following is an op-ed piece from Energy Minister Andrew Younger.

Since becoming the province’s Minister of Energy, I’ve read all the letters from Nova Scotians which have reached my office, both for and against high volume slick water hydraulic fracturing. I’ve read numerous studies and reports commissioned by various parties, including the Wheeler report, which was recently delivered to our government.

Some have questioned why we would forego the potential economic benefits associated with hydraulic fracturing. The first onshore petroleum well in Nova Scotia was drilled in 1869. More than 125 wells have been drilled since that time and we still don’t have commercial production generating royalties. Even before the current ban on the practice, there were no requests before the department to proceed with hydraulic fracturing. Industry has not demonstrated significant interest in our shale resources to this point, so we are not shutting down an active industry in our province. We have the benefit of time to allow issues to be addressed.

Our resources belong to Nova Scotians and they have a say in how they are harnessed. These resources aren’t going anywhere, so we have time to better understand the science and interests of Nova Scotians before exploiting our shale resources using hydraulic fracturing.

In Nova Scotia, we’ve had three wells that were hydraulically fractured in shale formations. Across North America, the Council of Canadian Academies says “several tens of thousands” of shale gas wells are currently in production. The majority of shale-based wells are stimulated using high volume slick water hydraulic fracturing, a process where, as its core, water, sand, and chemicals are pushed into the rock formation to help release oil or gas. There are numerous examples of this technique being used safely and without incident. However, there are also examples of things going wrong.

Across North America, the debate over hydraulic fracturing has turned to dueling documentaries, and studies, all claiming to hold the absolute truth about the safety and merits of using hydraulic fracturing. The Council of Canadian Academies, in its report for the government of Canada, summed up the reason for such a split in opinions stating: “Many of the pertinent questions are hard to answer objectively and scientifically, either for lack of data, for lack of publicly available data, or due to divergent interpretations of existing data.”

Nova Scotia is an energy leader. Our decision will not change this. Government is actively working with the offshore industry to ensure the responsible and sustainable development of those resources in a way that ensures the primary benefit is to Nova Scotians. Onshore, coal bed methane projects in places like Stellarton have received strong community support and show strong promise. We are actively engaged in promoting our renewable energy industries, especially in offshore renewables. We are becoming a world leader in tidal development and will be one of the first to deploy a commercial scale tidal project, harnessing one of our richest natural resources to the benefit of all Nova Scotians.

Nova Scotians have clearly indicated they are not yet ready for the use of hydraulic fracturing in the development of shale reserves. Residents in communities across Nova Scotia will have time to consider new research and information as it comes available, without an artificial deadline. At the same time, new extraction technologies are being developed which will likely minimize or eliminate many risks and concerns.